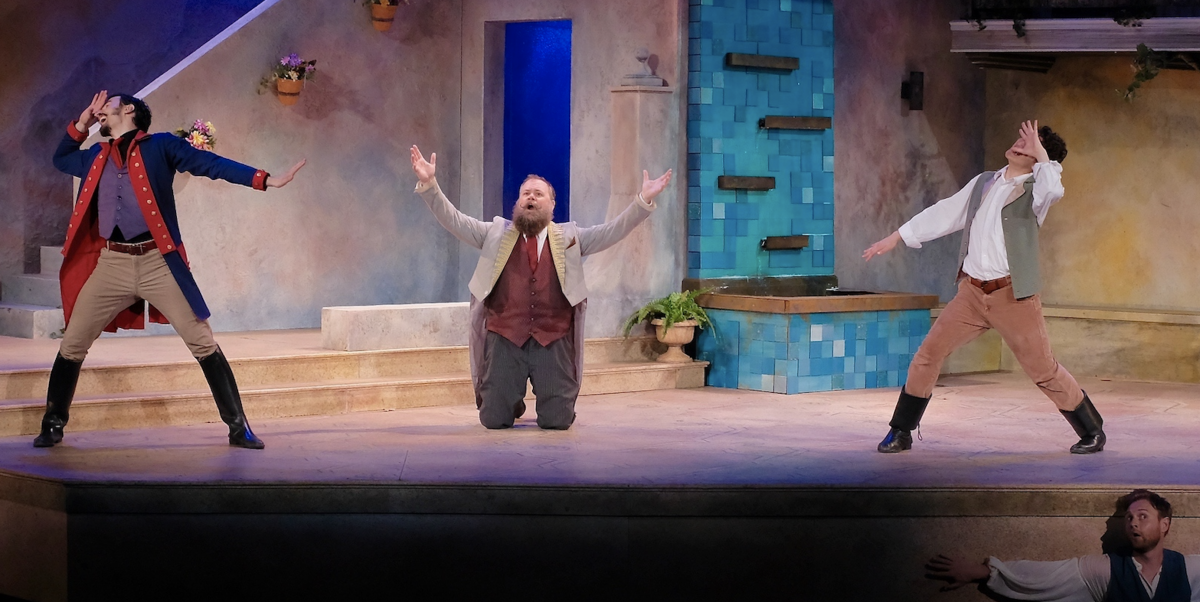 After two decades of working in professional and educational theatre, I have learned how to be comfortable in uncomfortable situations. I have performed Shakespeare without rehearsing with my scene partners. I have finished building scenery for Act II while Act I was underway. I have told an angry audience that “the performance will begin in a moment” while there were clearly panicked stagehands dangling in the air above me frantically repairing equipment.

In short, I have had to be comfortable making things up as I go along in front of anxious people who are sitting in the dark and waiting to get their money’s worth. If there is a better description of the job of a graduate composition instructor, I’ve certainly never read it. In fact, I have found that many of the skills I have learned in the theatre—particularly those I use as an acting teacher—have become guiding principles for English 100. Here are three of the lessons that I use most in my composition classes:

1. It’s not about becoming someone else

One of the biggest misconceptions that beginning acting students have about (Western) acting is that it is their job to somehow become another person. Beyond its ontological impossibility, this kind of thinking puts the actor in a place where they themselves are not interesting or good enough to watch. Starting from this kind of negative self-image usually leads to self-conscious acting that makes both actor and observer uncomfortable. Instead, we teach actors to trust the physical, expressive, and emotional equipment that they use every day.

First-year college students often suffer from the same feeling as beginning actors. They come to college believing that their job as students is to “write like an academic,” as if their job is to imitate some kind of “other.” The first thing I tell them is that they are already academics!

To work against this imposter syndrome, my first formal assignment asks students to write two mock social media posts about a single event. Something as simple as going to a football game with friends naturally becomes a very different story when shared on Facebook versus Instagram versus Twitter. By analyzing these pieces, students very quickly see that they already have a sophisticated understanding of voice, context, audience, and purpose. You are not lying when you use different words to tell your grandmother a story as opposed to a friend; you are writing as yourself in a different context.

Academic writing, I tell them, is the same problem. Your job is to find the version of your own voice that is appropriate to a particular academic situation, and express your ideas just as clearly and engagingly as you would on Instagram.

In early 20th century Russia, Konstantin Stanislavsky found himself dissatisfied with acting education. Actors were trained to technical perfection with musical voices, beautiful gestures, precise facial expressions, and so on. In Stanislavsky’s estimation, however, most actors remained mediocre, and their technical training left them little more than overtrained automatons without a source of inspiration. He wondered, what if you could teach inspiration as a technique onto itself?

For nearly three decades until his death, Stanislavsky sought to do just that. Before focusing on technique, he wanted to train actors’ imaginations so that they could experience the play instead of merely representing it. Their own memories, imaginations and experiences could then make something of the role that no other actor could. Put another way; instead of just teaching the actor how to speak, Stanislavsky first taught the actor how to have something to say.

With this in mind, every major writing prompt I give asks students to reflect on their own relationships to the world around them and how they want to shape that world. For their final English 100 project, they must research an important issue within their community, propose a real-world intervention on that issue, and prepare persuasive writing materials (in multiple modes of writing) for the exact person or body that could implement their vision. My students routinely research and design programs designed to aid Madison’s population experiencing homelessness or to curb sexual violence on campus.

I find that this approach—helping the student writer have something of their own to say—leads to a much deeper and more urgent connection with the technical skills of writing. Just like the actor with a fiery passion and a voice that cannot reach the back row, writers who want to be read will beat down your door to demand that you help them with the technique they need. I find that technically proficient writers are almost always empowered writers first.

3. Teach the person, not the material

To many outside observers (and more than a few inside observers), the subject matter for a western acting class can look specious. We teach students how to concentrate, remember, stand, walk, speak, emote, and so on. Who needs training on something that is just part of the business of being human? Most writing teachers, I suspect, will be more sympathetic. After all, these skills are ancillary to the four modes of literacy (writing, reading, speaking, and listening) that we teach in English 100.

However, this perception about theater education stems from a misunderstanding about what we teach. When I teach a student how to concentrate onstage, I do not provide them with a set of bullet points that will allow them to no longer feel self-conscious in front of an audience. Instead, I guide that particular student through a complex recursive process of trial, error, and feedback that will hopefully lead to developing the skill within themselves.

This approach means that until the student is able to perform that particular skill without my assistance, I have not done my job as a teacher. If I move an unprepared student on to another skill that requires that level of concentration—say, the beginnings of scene work with a partner—that student will self-consciously worry about the audience, teacher, or an overdue math assignment and get nothing out of the scene work. Instead, if I allow that student the time to make progress on one skill before introducing the next, the learning process becomes instantly less frustrating all around.

This is totally understandable, since the subject matter is often what got us into our field in the first place, and we want to give our students the gift of our passion. My advice, however, is to be willing to dump your plan in response to student needs. Instead of focusing on “getting through the syllabus,” try to make sure that you know by heart each student’s successes and struggles by the end of the semester. I suspect you will have shared more of that passion that got you into teaching in the first place and left your students more likely to keep working once you are no longer in the room.

Images courtesy of Interlochen Center for the Arts