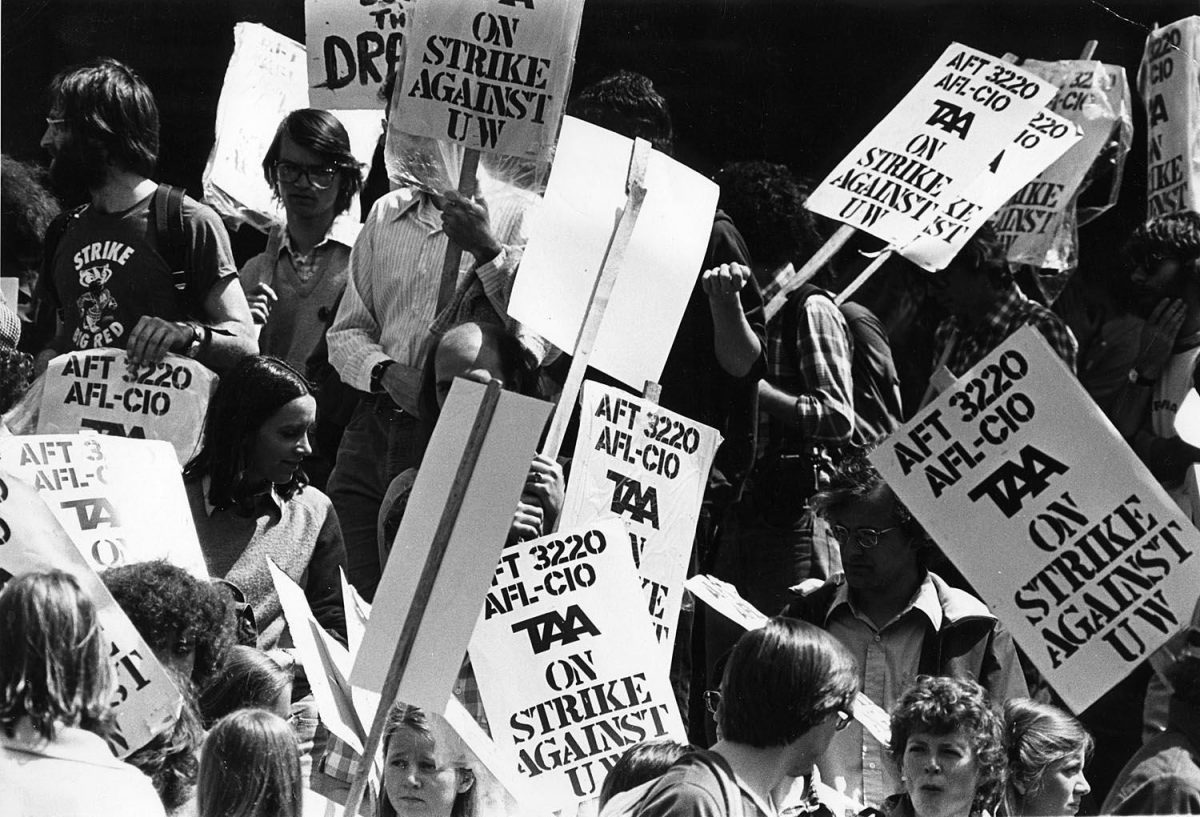 A tense history of teaching assistant strikes at UW-Madison was set off in 1969 after the College of Letters and Science Faculty officially dissolved the requirement for the only freshman composition program on campus. At the center of the decision to abolish the program, and the strikes that followed, were concerns over what structure of management allowed for “genuine education” to take place. This phrase was used by English TAs Pauline Lipman and Richard Damashek in a Daily Cardinal article published shortly after the decision to abolish English 101 and 102. Lipman and Damashek’s article was a critique of the way the department  reprimanded and intimidated TAs who had reinvented, organized, and problematized freshman composition. Whatever else constituted the core tenets of “genuine education,” TAs believed it could be achieved only with a thoroughgoing resistance of authority. David Fleming put it this way:

…many of the more radical English TAs at UW in 1968  and 1969 were trying to develop what one might call a teacherless writing class, in which authority is dramatically decentered and the student’s responsibility for his or her reading, writing, and thinking—his or her own education and life—radically heightened. . . .  [I]n learning to write, students need to be personally engaged in what and how they are writing, to care enough as writers . . . to truly reflect on and improve the ideas and language they are creating.

Besides traces in the meeting minutes, personal memoirs, and memories written in the wake of the abolition, much of the emotion, radicalization, and documentation of the slow daily pursuit of “genuine education” in freshman composition courses is missing from the archive. Photographs from the time of the strikes grant blurry, sometimes mundane glimpses of the normal stock and trade of any movement discernible as a “strike”: picket signs, capital letters, wooden stakes, clenched fists, and foldable chairs.

One photo does stand out to me, though, for the way it captures a sense of breathlessness and inundation of writing. It depicts a group of tightly-packed together striking students, almost crowded out by signs stenciled with bold text:  “AFT 3220 / AFL CIO / TAA / ON / STRIKE / AGAINST / UW” (above). The broad sheets of paper are held close to students’ bodies: over the shoulder, below the chest, hovering, and shielding faces across the frame of the photo. If the writing that TAs of the late 60s sought to foster in the classroom shared anything with what they themselves produced in practice, the makeshift picket sign makes apparent a genre of writing that is fugitive, unexpected, an extension of the body, and made for the moment. It does what it says and pushes for change.

By now, the rhetoric of “decentered” classrooms might be an old credo: it is good practice to hold a position as an educator that centers the experiences, languages, affects, identities, and ways of being and knowing that students carry with them. But for me, the legacy and efficacy of a decentered pedagogy and the embrace of its fundamental principles by TA forebearers should inform the English 100 classes we teach today. We should always be pushing for a style of decentred, radically open, anti-authoritarian, earnest teaching. One way this might manifest in the classroom is through a looser, less hierarchical structure in which the teacher relinquishes control of managing every aspect of an activity or assignment. Another potential avenue to this ideal could come through a style of play and experimentation that doesn’t quite know beforehand where it will lead. The most rigorously justified and organized lessons rarely accomplish all of what they’re designed to do. Instructors could instead design activities invested in students’ abilities to lead and self-advocate in ways that are meaningful to them. If we look into history for images that could sum up a decentered pedagogy— images that manage to be irreverent, wry, and meaningful all at once— I think we could do much worse than an image holding together sign and body, voice and presence, word and deed.